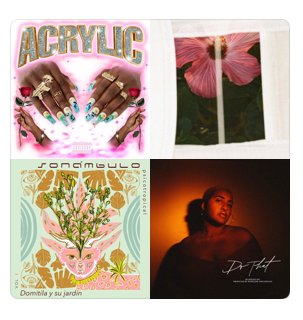 Last week, I wrote a preamble for this little series. If you missed it and simply cannot move forward without context (I feel you), check out the post and the artists featured in Part 1 — Abhi the Nomad; Benny the Butcher; Elisapie; Flohio; Ivy Sole.

If you’re ready to get after it, here is Part 2: another handful of artists who released new music in 2018 and didn’t make it onto my radar screen until this year:

So I knew about Leikeli47’s 2018 release Acrylic when it came out and I listened to it then. But, I set it aside too quickly and I’m making up for lost time now. Leikeli47 is one of those artists (and Acrylic is one of those albums) that took me a while to process and feel. I chalk that up mostly to the influence and use of trap beats and sounds throughout the record. I’m not a big trap fan. Setting that aside, though, Leikeli47 is pure, uncut, straight fire…and once you’re in with her, you’re in. Her talent is off the charts. She has endless swagger. Her raps are tight, smart, and sassy. And, there is a lot to draw out of this latest record (her second full-length) because it is at once enormously fun and incredibly serious (centering as it does the lived experiences of black women and black womanhood).

I heard MorMor’s single Pass The Hours many weeks after it’s December 2018 release, but I haven’t really stopped listening to it since. A couple of days will go by without a spin, sure, but like an addict, I’m back for more soon enough. I didn’t know about MorMor before hearing this track, but it hooked me onto him immediately. The song is a total mash-up of styles, but manages to sound timeless to me. It blends bedroom pop cool with easy-going, soulful 70s vintage folk guitar melodies and glittering 80s synths near the song’s tail end. Meanwhile, Mor Mor’s voice has shades of Art Garfunkel in the verses and a Marvin Gaye-inspired falsetto in the chorus. It feels like a nearly perfect song.

Rayana Jay’s Do That is another late 2018 release single that didn’t land for me until the first part of 2019, but has been in steady rotation since. A new discovery for me, everything about Rayana Jay‘s performance on this track is just so incredibly smooth and warm. Her buttery voice sounds effortless and takes center stage, riding over a thick downbeat, great keyboards, and a slightly choppy electric guitar. It’s all the smooth, soulful goodness of 90s/00s R&B and she is completely in the cut with that vibe on this song. Rayana Jay just dropped a new EP last week, Love Me Like, so there’s new stuff to listen to that I won’t miss this time around.

I honestly don’t know who comes out better when I listen to this track: Ryley Walker for adapting and covering it or Dave Matthews Band for writing it in the first place. I know a lot about the latter artist; not much at all about the former. This track allow me to revisit a band and rediscover a song that I haven’t listened to in years, while discovering an artist whose normal work — a highly experimental fusion of psychedelic prog-rock, folk, jazz rock — likely wouldn’t have grabbed me. Walker’s family straight-ahead version of Grace is Gone (released in November 2018 as part of a full-album cover of The Lillywhite Sessions, DMB’s infamous “lost” record) hit me like a depth charge. Walker brings the original, haunting, wounded lyrics to the forefront with a gentle voice, quiet melody and bass guitar accompaniments, and the soft backing rhythm of a simple shaker. The song takes on added weight in light of Walker’s own struggles with addiction and depression, which recently caused him to cancel a spring European tour.

Another credit to NPR here — this time to Alt-Latino host Felix Contreras for featuring this killer band, which fuses African rhythms with traditional and modern Latin American melodies and beats into a self-defined (?) new genre “psycho tropical.” Sonámbulo Psicotropical includes band members from Costa Rica, Cuba, Colombia and El Salvador and so they pack in a ton of culture and influences into their sound. What drew them to me is that their music is just so damn funky and so much fun and so full of life. Afrujo — one of the lead tracks off their 2018 EP Domitila y Su Jardin — is my young daughter’s new favorite song, so, thankfully, I get to listen to it all. of. the. time.

I don’t always go for 80s-style pop tracks, complete with Casio-keyboard-produced handclaps, but I went for this one. Hard. Your Smith (who formerly performed as Caroline Smith) included this track and three others on her debut EP Bad Habit, released August 2018. Debbie is an incredibly infectious, endearing, breezy, and confidently cool track; a song whose lyrics talk about love/hate relationships and whose music calls to mind a hand-shot, quirky, music video of high-school misfits rocking out, not giving any shits, and taunting the jocks.