Yikes, July up and ran away from me. After a brief, unannounced hiatus (oops, sorry y’all. #nonmonetizedsidehustle), In My Ear is back! And, we’re going to crush it this week with three new posts to make up for the three weeks of lost time.

First this week was the funk stylings of The Internet. Second, an intimate, hushed single from singer-songwriter Damien Jurado. And, now…the blues of Fantastic Negrito.

If you don’t know it already, Fantastic Negrito’s story is pretty amazing. The hero’s journey. Success followed by failure and then re-birth. Creative death and then actually near-physical death. Street busking to winning a Grammy in less than a year. All of this, perfect fodder for the brand of fiery, raw, Delta blues that Negrito channels.

He released his second full-length album, Please Don’t Be Dead, in June and it’s a barnstormer. Sonically cohesive. Lyrically potent and political. A shot across the bow of the so-called American Dream and the state of the country — and us a people — at this dangerous moment in our history. Stories of lost hope, but also redemption. 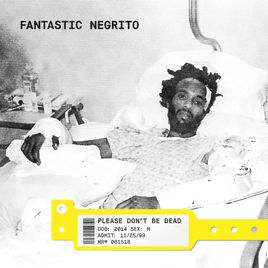 And, that’s all great. But, I’ll be honest, I almost don’t care what the lyrics are when the music is a good as this track Bad Guy Necessity. The heavy beat, snarled lyrics, and smokey guitar riffs sound…perfect. It’s a Saturday morning, so no need to go deeper than that. Just jack this song up and feel your face grimace in appreciation as Negrito wails.